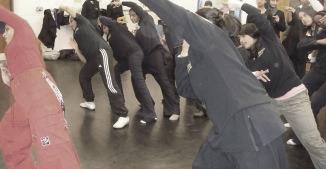 Asian Girls Dance Programme - I was based in Luton for many years and was delivering multi-disciplinary arts programmes through Bedfordshire. I was asked to attend Denbigh High School for an ‘Enrichment Day’, offering dance classes throughout the day. My classes were going very well until my last session.

My dance studio was entered by a barrage of rowdy teenage girls with plenty of attitude. The leader, clearly, stood not too far from me, in front of the rest of the class. She had decided that she would make a mockery of the whole day and finish with intimidating me in my class. As the class went on she became rude with remarks made in English and Bangladeshi. I was quite bemused and asked her to leave my session and not return until she could severe her ties with her attitude. She apologised profusely and remained in the session, completing it. I, was quite grateful that the session had ended, but was met by the sports teacher, who said that the sessions were well received, particularly with the girl who was disruptive, her name was Rushnara, the school were pleased at the engagement and wanted me to start running dance classes every Wednesday for the young girls.

I was thrilled and agreed to the dance programme in partnership with Active Sport, Luton, and started to prepare myself for the sessions.

My first session was a bit low on numbers and to my horror, Rusnara walked through the doors of the studio, accompanied by four of her friends. All in all, there were a total of eight girls in the session. I started my session and four of the girls that entered in with Rushnara did not want to participate, but instead sat in the corner of the studio, giggling and causing a disruption. To my utter surprise, Rushnara turned to the girls and shouted, ‘look, if you don’t want to dance then get out and let us get on, Sorry Miss, can we start again'. My shock of this turnaround was met with a sense of pleasure and satisfaction. We continued the session, and at the end Rushnara approached and thanked me and told me how much she enjoyed the session and was coming again with more friends.

I was left with a feeling of how misunderstood she was, and I felt this may have been a cry for help. I was asked to evaluate the first session, which I did, and was told that Rushnara was due to be expelled from school, but she seemed to have turned herself around and the dance classes seemed to have given her a focus. With this in mind, I decided to focus on her development and help her to make the life choices for herself, and other young girls like her.

Soon my dance classes grew to huge proportions, the girls of all race and religions came flooding in. We put on dance performances to showcase the work we had done, which all the girls delivered with pride.

The dance classes were flourishing and Rushnara followed me everywhere, with the permission of her parents and family, I took her to events and programmes where she developed her skills. I gave her the autonomy to help me in the teaching dance to others. I also introduced Rushnara to life outside of Luton, where she performed at many venues across the UK, and worked with other young people and helped them realise their dreams.

Rushnara started to focus hard on her studies and wanted to teach too. One day she asked me if she could do her work experience with me. I approached the school to suggest this, but due to restrictions regarding school insurances he was unable to shadow me, and was very disappointed. I approached the school once more and suggested that she did her work experience with the GCSE Dance Teacher, and help her with teaching other students. This was accepted and Rushnara was then shadowing the dance teacher, in school, during all dance classes. One day, Rushnara said to her teacher that she wanted to be like me, to which the teacher replied, ‘Geeta’s job is very difficult as she has to approach schools and local authorities and funders to enable her to survive. Rushnara, notconvinced, then approached me and asked how hard was it to do my job, I simply said, ‘nothing is hard if you put your heart and soul in it'. I enjoy working with young people and deliver projects, all I have to say is, nothing beats a good education, with education, you can achieve anything.’ ‘The world is truly your oyster, you have to make the drive to get it.’

Time went by and Rushnara became more and more focussed, she would call me when she needed direction and guidance. One day she asked if I could help her choreograph her GCSE Exam Piece, which I was delighted to do. She passed with good grades and did well in her other subjects.

As she waited for her results, she called me and asked me for direction in her studies. I simply asked her, in her heart, what she likes doing the most. She replied, ‘to help and teach people.’ So I told her, that she should go on a course that helps her in teaching.

Today, Rushnara ahieved her ‘A’ Levels, and she went on to university and qualified. I am so pleased and feel a sense of great reward, that I was able to change a life for the better. Dance was the conduit to the success of Rushnara’s life, and there are many other Rushnara’s in the world that need the support.

“Dance is the hidden language of the soul” ― Martha Graham